This piece – my most recent – gave me a lot of trouble! After I made the green garland base, I had to put it away because it just wasn’t what I had envisioned. Took it out several months later and added more green. Decided I didn’t like my plan, especially one particular section, which I couldn’t remove without destroying the whole piece. So I ignored it and just worked on the section that eventually would hold the flower. This went on until I did several passes – sewing beads back and forth in rows across the piece – that I kept as removable sections, just in case. And sure enough, they ended up being really ugly and I had to rip them out! But finally the flower needed some leaves and the leaves ended up crawling up the other side of the necklace, and the result I describe as follows:

A garland of jungle greenery displays a profusion of jewel-like leaves and a metallicized flower in full bloom – breathtaking! Hand-woven off the loom, the necklace glitters as the variety of seed bead shapes and textures reflects the light. It’s an Eclectic Enhancement sure to make a statement wherever you wear it.

And that’s the story of this Jungle Fantasy!

There are no reviews yet.

Be the first to review “Jungle Fantasy” Cancel reply 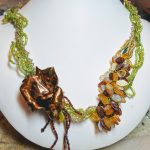