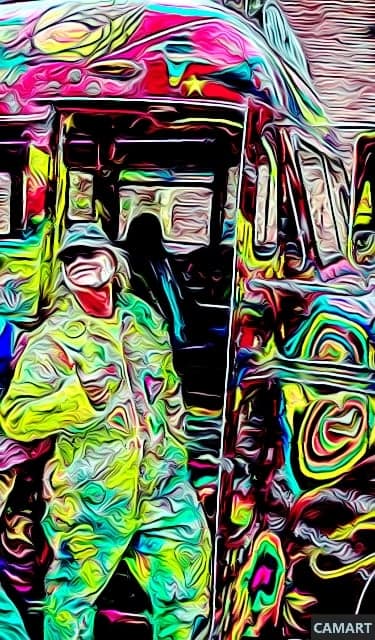 Turtle has been on the bus since it arrived in Queens NY in August of 64.  He was one of the first customers to contact Ken after he was highlighted in High Times for opening the Key-Z Productions store front.  An early signed VHS of some of the bus footage was procured and Turtle became a taper in 1979 recording every live show he could attend. In the early nineties, Turtle made it to Autzen stadium to see the Grateful Dead and by 97 was living in San Rafael. Spent several years enjoying Merl Saunders and The Rainforest Band  and the return of Phil Lesh to the stage in the bay area  and then moved south to Venice, CA.  In 2006 he helped start the free celebration of the Arts in Venice and has produced 14 annual Venice Beach  Music Fests and 7 Venice Spring Flings. IN 2014 Turtle enjoyed riding Furthur from PA to NY to Baltimore and learned the true spirit of Going Furthur continueing his bus ride past Peach Festival without luggage or a plan. Soon he got a long sleeve shirt and a toothbrush and had an amazing time at the 45th anniversary celebration of Woodstock with the Merry Prankster crew. Turtle helped launch the reunions with Wiz and others and has helped organize and produce a number of events for the Merry Pranksters since 2014. You can learn more by enjoying the panel production from SF about Why  Merry Pranksters Are Necessary here: https://vimeo.com/251623980  ..